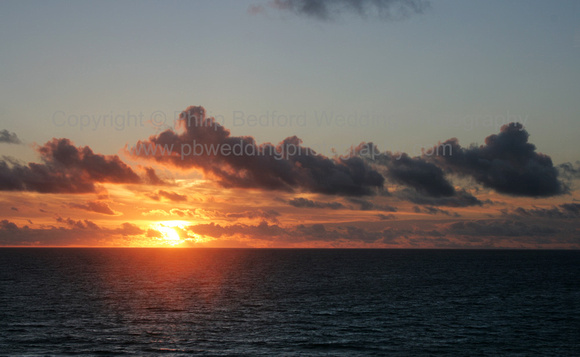 The sunset that we experienced on the evening that we got engaged.

Inspired by a rather unfortunate story of an elaborate marriage proposal going rather wrong, I thought I’d share (my version) of how me and my fiancee got engaged last year. We’re getting married in July next year and plans are coming along nicely. But here’s how the process all began. I bought a fake plastic ring from a high street store as I had spent a few days shopping around but wanted my partner to have some say in what style ring she would have but I was pretty close with what I’d found already (see previous post).

We were going on holiday to a surprise location which I didn’t know the location of as my girlfriend wanted to treat us both for our anniversary and it was quite fun having the surprise which I found out at the airport. Not knowing where we would be for the actual proposal gave me a bit of a challenge and the opportune holiday gave a perfect special occasion to pop the question! So when we arrived at the hotel on the coast of Portugal, near the beautiful area of Sintra outside of Lisbon, the beach seemed like the best place to do it. A west facing beach over the atlantic ocean was surely guaranteed a beautiful sunset which would provide a romantic setting.

So the big evening arrived (our anniversary), we planned to go for an early dinner at around 5-6pm so that we could get back to the hotel beach to watch the sunset over the ocean. We thought we’d walk into the nearby town to the restaurant and order a cab back when we needed to. Not researching or booking a restaurant was my first mistake… The town we were to walk to was Colares, a town rather renowned for it’s Portuguese green wine so we thought we’d find a nice restaurant in this surely rather well populated tourist town, judging by the significant sized font that it was written in on our local map. After 3 kilometers of walking and not much sight of the town we were both starting to feel a bit fed-up, particularly as my girlfriend was just wearing pumps but we continued on. When we got to the town we found a police station, fire station, town hall, swimming pool and a small restaurant all closed… we continued walking a bit through the town but this place was obviously smaller than we thought. So, after 5 minutes of deliberation we called a local taxi company and continued to wait for 40 minutes for the cab to arrive… oops.

We got the taxi to drop us in a smaller beach town which we’d visited earlier in the day, this we knew was more populated with restaurants and cafes and we were rather hungry at this point. Past caring, we selected the first place we saw and proceeded to enjoy some Sangria and pizzas in a rather humble cafe. We had an enjoyable meal, good food, nice Sangria and a big screen TV playing the  american version of Masterchef followed by Sex in the City. Hmmm…classy.

So considering that we were at leat 90 minutes behind schedule, the sun started to set a bit earlier than planned and we’d only just finished our meal. Realising the moment was slipping past, but that we still had a lot of sangria left, we grabbed the bill but asked the restaurant to save the drinks for us to come back to (we’re not very wasteful when it comes to alcohol) and I told my partner we HAD to go to the beach and see the sunset right now! We’d gotten onto a second jug of Sangria and I was starting to feel quite tipsy (drinking seemed to calm the nerves a bit) so we rushed down to the beach to be greeted by a stunning sunset and a rather freezing wind.

I found a nice rock for us to sit on, and teeth-chatteringly told my girlfriends how much she meant to me. Fumbling in my pocket for the ring was rather tricky whilst sitting down, though I thought sitting down was a good idea as it meant I could cunningly swivel into a kneeling position rather quickly. Assuming this position I stuttered in the cold, “Will you do me the honour of being my wife?” to which of course she said yes. Placing the plastic ring on her finger, we became officially engaged. We then went back to the cafe, polished off the sangria, ordered a cab to get back to the hotel and opened a bottle of Champagne and listened to 80’s music on my phone.

Not exactly the perfect proposal but we got there in the end. Some people plan these elaborate proposals (see above) and even get a photographer along. I’d be very keen to do a shoot of an actual proposal, but I’m glad we didn’t try and do anything like that!